Three LGBTIQ advocates took their case to the Supreme Court and today they won a historic victory for civil rights.

The Supreme Court ruled that gay and transgender workers are protected from discrimination by existing laws as a result of their fight.

Therefore, employers are now banned from firing LGBTIQ employees because of their sexuality or gender identity.

The three advocates all suffered discrimination at work, and all three fought their individual cases in lower courts for years.

Sadly, only one is alive today to celebrate their victory. 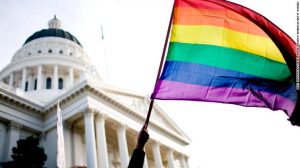 However, when he joined a gay softball team in 2013, his employer fired him.

Bostock said he is “elated” by today’s ruling, expressing gratitude to the court, his lawyers and advocacy groups and supporters.

“Today, we can go to work without the fear of being fired for who we are and who we love.

“Yet, there is more work to be done. Discrimination has no place in this world.

“I will not rest until we have equal rights for all.”

The Altitude Express skydiving company fired Donald Zarda (centre) because of his sexuality in 2010.

Before a tandem skydive with a woman, Zarda tried to put her at ease over their close physical contact by telling her that he’s “100 percent gay”.

The customer complained and the company subsequently sacked Varda, accusing him of sharing “inappropriate information” with a customer.

Sadly Zarda died in an accident in 2014.

Ahead of the ruling, Zarda’s partner Bill Moore said he missed Don.

“Don would want me to keep fighting not just on his behalf, but on behalf of all the LGBTIQ people in this country for whom workplaces remain unsafe and inhospitable.

“It would be life-changing for so many people. They can stop worrying and know they can simply be themselves.”

A Michigan funeral home sacked Aimee Stephens (left) after she came out as transgender.

The funeral home’s owner argued in court he “believes the Bible teaches that a person’s sex is an immutable God-given gift”.

Stephens sadly passed away on May 12.

In a statement written before her death, she said,

“Firing me because I’m transgender was discrimination, plain and simple.”

She said the court’s ruling would have made her and her trans siblings “feel safer and more included in society.”

“For the last seven years of Aimee’s life, she rose as a leader who fought against discrimination against transgender people.

“[It] started when she was fired for coming out as a woman, despite her recent promotion at the time.

“I am grateful for this victory to honour Aimee’s legacy and to ensure people are treated fairly regardless of their sexual orientation or gender identity.”

Can you be refused a job because of your tattoos? The simple answer is -…