A security guard at Perth’s For The Love music festival allegedly kicked out a queer woman for kissing her female friend.

QNews reports that the security guard told Asha Couch and her friend to leave because they were “too intoxicated”.

But Couch claims neither of them had drinks at the time, writing:

“Around 8pm, I was sitting on the grass with another girl and we were kissing and talking.

“We were not bothering anybody nearby [and] we were not being loud or disruptive or offensive in any way whatsoever.

“We also didn’t even have drinks with us at the time.

“A member of security approached us and told us that we were being kicked out of the festival.

“I asked what we had done wrong, and was simply told that we were too intoxicated and needed to go.

“Neither I nor my friend were being anything but respectful to the people around us.

“We were not too drunk or causing any problems – we were just kissing.

“I had seen countless heterosexual couples, far drunker than us, all up in each others’ faces all day with no complaint from security.

“It doesn’t take a genius to figure out what the security guard really took offence to.”

Couch claims For The Love didn’t respond to her messages until she took to Facebook with the complaint.

“Discrimination happens when someone with a particular attribute is treated unfairly because of that attribute,” he said.

“If security kicked these women out of the festival because of their sexuality, they will almost certainly have a claim for unlawful discrimination.” 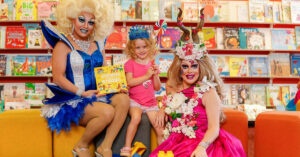 “Petition calling for Drag Storytime ban bull of signatures from far, far away”

The Queensland government could be the first to break its own new Human Rights laws.…