People with disabilities are starting their own businesses to avoid discrimination, according to a new report.

The research found employers often reject workers with disabilities for positions or career development as a result of their impairment.

The authors spoke to self-employed people living with a disability.

They found many went into their own businesses as a result of discrimination and other negative experiences.

Professor Simon Darcy lives with a spinal cord injury and co-authored the research.

He told the ABC:

“I’ve had disabled people tell me they’ve sent their resumes around hundreds of times but they never get interviewed and then there are people who don’t mention the disability on their resume but they can see the disappointment on people’s faces when they turn up.

“There’s also that other form of discrimination where people with disability aren’t considered for career progression and situations where someone who’s acquired a disability and are then bullied out of their jobs.” 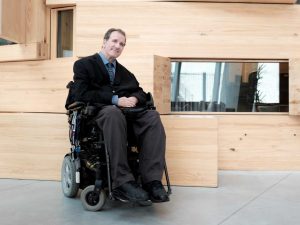 ‘He didn’t say anything about you being in a wheelchair’

The ABC featured the story of pool designer and installer Andrew Meddings.

He described one client’s reaction when he turned up to a job:

“Someone had recommended me and [the client] had heard great things about my work.

“When I turned up he said: ‘Jeez, John said your work was amazing, but he didn’t say anything about you being in a wheelchair’.”

Meddings suffered a spinal cord injury as a result of a motorbike accident in 2000.

He said there are times when people find out he is in a wheelchair they suggest he sends someone else because their place is not accessible.

But he said often he just started “turning up” to a place and working with whatever was there because “if people see you getting out of the truck, they’re less likely to have expectations that you can’t do the job.”

“It takes a bit of work but we always find a way,” he said.

Meddings employs four staff, in addition to a number of contractors, and is happy to run his own business. 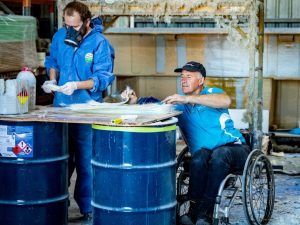