Hirst plays for Wakefield Trinity and expressed shock and disappointment at Folau’s signing following his sacking by Rugby Australia.

The Catalans Dragons offered Folau a one-year contract, 10 years after he last played league for the Brisbane Broncos.

He took to social media to slam the Rugby Football League for allowing Folau back into the game:

“It shows none of the bravery, camaraderie or integrity RFL expects from its players, staff and fans.”

I’m shocked and disappointed at the signing of @IzzyFolau. Our great game is tasked with fighting against homophobia and standing up for the values it puts such high stock in. It shows none of the bravery, cameraderie or integrity @rfl expects from its players, staff and fans

There are millions of people practicing their religion who are not homophobic.

Prejudice is prejudice and using religion, political beliefs or anything else to justify it is not ok.

Wigan announced that its Pride Day will be on the day of their home match against Catalans only hours after Folau’s signing.

The move described as a “not so subtle dig at Folau”.

The British rugby league community greeted the news with outrage.

Super League CEO Robert Elstone expressed disappointment at the signing but conceded he could do little:

“Super League deplores the homophobic comments Israel Folau has made in the past, which squarely contradict our sport’s core values.

“I have sought the opinion of informed voices connected to our game, and the majority share my disappointment that one of our clubs has chosen to sign him.

“There is a strong feeling that the decision to sign him lets down many people connected to our sport.” 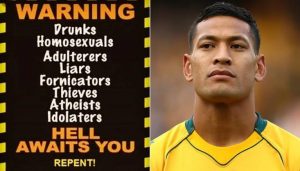 Folau will have contract terminated if he repeats comments

The Catalans Dragons have assured Super League that strict guidelines are in place to prevent Folau from repeating his comments.

“They have also assured us that his contract will be terminated immediately should he do so,” Elstone said.

Folau promised not to make any comments that could cause offence.

Although, he made the same commitment to Rugby Australia before going on to post homophobic slurs.

“I acknowledge the views expressed by Super League and the Rugby Football League,” Folau said.

“I’m a proud Christian, my beliefs are personal, my intention is not to hurt anyone and I will not be making further public comment about them.”

Club is asking for trouble

Industrial advocate Miles Heffernan warned the Catalans that they are asking for trouble.

“They cannot resist the urge to evangelise and shove their hateful and hurtful beliefs down the throats of other people.

“My guess is that Folau will keep his mouth shut, because the last time he chose Jesus over football, it cost him millions of dollars.

“And if we know one thing about Israel Folau, he loves money and his greed knows no bounds.”