Collingwood football and netball players have apologised after a review found systemic racism at the club.

The open letter signed by 150 players begins with the word “sorry” – a word Eddie McGuire failed to say at a previous press conference.

Instead, he described the release of the review as “a proud day” for the club, leading to calls for him to step down. 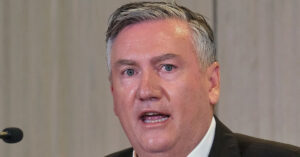 Eddie McGuire described the release of the review as “a proud day” for the club, leading to calls for him to step down.

The letter of apology from the players follows the release of the “Do Better” review commissioned by the club.

The damning report by Larissa Behrendt, a University of Technology Sydney professor, found Collingwood has a problem with structural racism.

The findings vindicate former player Héritier Lumumba, who had previously complained of racism at the club, including being called “chimp” by teammates. 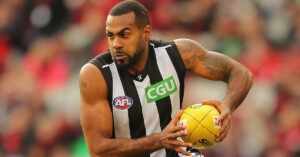 Former player Héritier Lumumba previously complained of racism at the club, including teammates calling him “chimp”.

“As athletes we are sorry to anyone who, through their association with our club, has been marginalised, hurt or discriminated against due to their race.

“Through our silence we feel responsible for these injustices.

“We acknowledge it is not enough to simply show support for the principles of anti-racism and inclusion.

“We will confront the history of our club in order to learn, heal and determine how best to walk forward together.”

McGuire held a hastily-organised press conference earlier in the week when details of the review were leaked to the media.

During the nearly hour-long session, he failed to once say “sorry” to those affected by racism at Collingwood.

Instead, he described it as “a proud day” for the club.

He also spent much of the press conference talking up his own achievements during his 22-year reign as President.

He subsequently apologised for what he said at the press conference.

Lumumba described Collingwood’s response to the report as “shameful”. 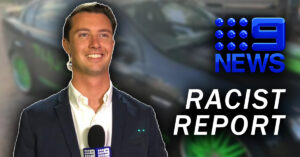 The National School Chaplaincy Program continues to discriminate against non-Christians, according to Reason Party leader,…