A bartender slapped on the bum twice by the venue’s owner has negotiated a $20,000 settlement.

The 28 year-old worker suffered anxiety and depression as a result of the sexual harassment.

The man responsible claims he had no memory of the incidents because he was drunk.

According to documents lodged in the Queensland Human Rights Commission, the first incident happened within a month of the woman starting work at the popular Brisbane club.

As she walked past the 50 year-old owner who was drinking with friends, she says he reached out and slapped her on the bum.

The woman felt hurt and humiliated, but continued working until the end of her shift.

The second incident happened during a Melbourne Cup function at the club.

Again, the man was drinking with friends.

As the woman and a younger colleague walked past him, he reached out and slapped them both on the bum.

Once again, she felt offended and humiliated, but this time she made a formal complaint to the general manager.

The owner apologised at a subsequent meeting, claiming his drinking left him with no memory of the incidents.

Soon after the meeting, the woman quit her job. 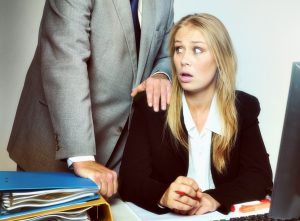 A report from a psychologist presented to the QHRC said the woman showed symptoms of:

The report confirmed the symptoms were the result of her treatment at work.

“It is my belief that the harassment and her subsequent loss of work were fundamental contributors to [the woman’s] emotional state.”

Human Rights Claims lodged formal applications for sexual harassment and sex discrimination in the QHRC on behalf of the woman.

“Everybody has the right to go to work without being subjected to behaviour which could potentially be sexual assault.

“The trouble is, when the perpetrator is someone’s manager or supervisor, it can make it extremely difficult for a victim to come forward and make a formal complaint, because they fear the impact it might have on their future career.”

Before the case reached a full hearing in the Industrial Relations Commission, the venue’s owner agreed to pay the woman $20,000 compensation.

“Make no mistake, if you engage in unlawful sexual harassment and discrimination, it is likely to cost you tens of thousands of dollars,” Mr van Oeveren said.