Another conservative politician has come out against the transgender community with a controversial petition.

Amanda Stoker says she is taking a stand against “dangerous and radical ideas” and “completely unreasonable” demands of transgender activists.

Another conservative politician taking curious interest in other people’s genitals

Stoker’s entry into this divisive culture war is hardly surprising from an ambitious politician who craves attention.

And there’s no better way to get attention than to throw rocks at a marginalised group.

On her website, Stoker claims that most Australians recognise the freedom of others “to live their life the way they want” –

But then goes on to write:

“You do have a right to teach your children they are born as either a boy or a girl and that gender isn’t something we can choose.

“You do have a right to keep women’s sport for women.

“And you do have a right to protect children from hormone treatment and surgical procedures.”

Stoker joins the likes of Mark Latham and Lyle Shelton in taking a curious interest in other people’s genitals.

Stoker’s qualifications in this area are unclear, other than being a conservative Christian who wants attention.

Her ignorance of issues involving gender and sexuality were highlighted last year when she claimed that being gay was ‘a choice’.

WHAT IS SEXUALITY DISCRIMINATION?

Who Is Amanda Stoker anyway?

Amanda Stoker is 37, and was gifted her Queensland Senate seat when George Brandis became UK ambassador.

She previously worked as a barrister and prosecutor.

In her maiden speech, she defended liberty of conscience, thought and speech, expect for the trans activists it would seem.

She previously claimed that the minimum wage is too high, and has called for the abolition of penalty rates.

The Courier-Mail recently exposed Stoker for using a fake account on social media.

Under the name Mandy Jane, Stoker defended herself against her attackers, agreed with her supporters and promoted her political views on controversial topics.

Stoker did not reveal she was the author of the sycophantic messages, or the person who resorted to such a desperate and pathetic tactic. 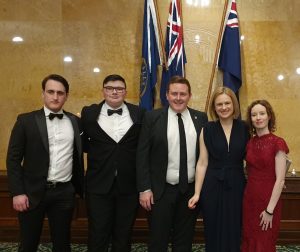 A group that wants to ban all mosques promoted Stoker as its guest speaker at a function last year.

The UQ Liberal National Club is the group responsible for recently storming a Brisbane public library to protest a Drag Storytime event.

Former club president Kurt Tucker was forced to step down after announcing that he wanted to join the Nazi party.

The LNP dis-endorsed the club at the end of last year because of its extreme views and conduct of its members.