‘9 to 5’, the smash hit comedy film that premiered 40-years ago this week, is sadly still relevant today, expert say.

The film tells the story of three women forced to put up with a sexist, egotistical, misogynistic and chauvinistic boss.

It also highlights blatant sex discrimination and appalling sexual harassment faced by women in the workplace in the 1970s and 80s.

Four decades on, many of those same themes still resonate with working women in 2020, according to employment law experts. 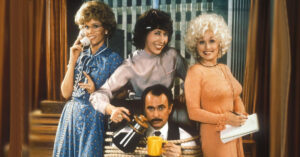 ‘9 to 5’ highlights blatant sex discrimination and appalling sexual harassment faced by women in the workplace.

Sexual harassment is a major issue tackled in the film.

Hart makes endless inappropriate comments and lewd gestures, and even spreads false rumours of an affair between the two, resulting in other staff ostracising Rhodes.

Becoming aggressive to stop the the harassment, Rhodes delivers one of the most memorable lines to her sleazy boss:

“If you ever say another word about me or make another indecent proposal, I’m going get that gun of mine, and I’m gonna change you from a rooster to a hen with one shot!”

In the film, Violet Newstead (played by Lily Tomlin) impresses as a highly capable and experienced employee at Consolidated Companies.

Despite her excellent qualifications, she is overlooked when a male colleague is promoted because of her boss’s sexist attitude.

To make the sex discrimination even worse, she trained the less-experienced male co-worker years earlier.

Completing the trio is Judy Bernly (played by Jane Fonda).

Bernly is new to Consolidated Companies – forced to find work after her husband left her for his younger secretary. 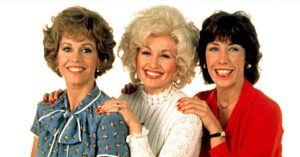 The movie is full of laughs, including a scene where the three women smoke a joint and dream about exacting their revenge on Hart.

However, it also highlights the serious issues faced by women in the workforce at the time.

How far have we come?

So after four decades since the release of ‘9 to 5’, how far have we come in Australia?

The Hawke government introduced the Sex Discrimination Act in 1984, thanks to the relentless work of our first female Minister, Susan Ryan.

It outlawed sexual harassment and discrimination based on sex, making Australia the first jurisdiction in the world to do so.

As the years have gone on, other protections have been added.

Despite these advancements, a significant gender pay gap still exists in Australia.

According to the Workplace Gender Equality Agency, as of May 2020, the gender pay gap is 14 percent.

And unfortunately, discrimination and sexual harassment are still prevalent in Australian workplaces.

Victoria Police, the New South Wales Police Force, the legal profession and our federal politicians have all recently come under the spotlight for fostering appalling cultures described as “boys clubs”.

A 2018 report by the Human Rights Commission found 72 percent of Australians have experienced workplace sexual harassment since the age of 15.

In the previous 12-months, 23 percent of women and 16 percent of men reported harassment at work.